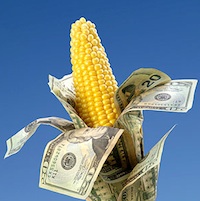 "As the summer growing season draws to a close, 2011 is emerging as the year of the superinsect - the year pests officially developed resistance to Monsanto's genetically engineered (ostensibly) bug-killing corn.

"In late July scientists in Iowa documented the existence of corn rootworms (a ravenous pest that attacks the roots of corn plants) that can happily devour corn plants that were genetically tweaked specifically to kill them. Monsanto's corn, engineered to express a toxic gene from a bacterial insecticide called Bt, now accounts for 65 percent of the corn planted in the US. "The superinsect scourge has also arisen in Illinois and Minnesota. "'Monsanto's insect-killing corn is toppling over in northwestern Illinois fields, a sign that rootworms outside of Iowa may have developed resistance to the genetically modified crop,' reports Bloomberg. In southern Minnesota, adds Minnesota Public Radio, an entomologist has found corn rootworms thriving, Bt corn plants drooping, in fields.

"[A] 2008 study, conducted by University of Missouri researchers and published by the Proceedings of the National Academy of Sciences found that within three generations, rootworms munching Monsanto's Bt corn survived at the same rate as rootworms munching pesticide-free corn-meaning that complete resistance had been achieved. Takeaway message: rootworms are capable of evolving resistance to Monsanto's corn in 'rapid' fashion."