Stand closely on the earth. Let its energy rise through you.
Breathe deeply the crisp cooling air and sense the gentle decay of a summer
’s past.
Listen to the leaves, to the birds and the last crickets of the season.
Then let the colors take you away to where only beauty matters. 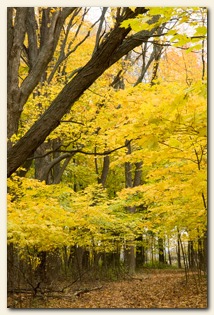 The brightest colors of autumn happen when dry, sunny days are followed by cool, dry nights.  The season is here and it is time to plan for those memorable October walks that fill your senses with the colors, smells and sounds of a season’s passing.   There are few places in Ozaukee that are not beautiful in autumn, but two of the best are also two of our hidden treasures.

Each of these two treasures is more than beautiful in itself any day of the year, but their plentiful sugar maples provide forest canopies that are absolutely stunning.  On a blue-sky day, the stunning factor doubles.  So where are they?

In an informal survey of “places in Ozaukee residents have heard about before,” Kurtz Woods is at the bottom of the list.  Who would expect to go looking for remnants of the deep forests that characterized Ozaukee County in pre-settlement times between two houses in a suburban area?

Entering Kurtz Woods is akin to falling down the rabbit-hole in Wonderland.  One minute you are walking past someone’s lovely backyard and the next you are standing deep in the Kettle Moraine State Forest, or so it appears.

Designated as a State Natural Area, Kurtz Woods hosts more than 82 species of trees and spring ephemerals.  This thirty-one acre forest is dominated by sugar maple and American beech.  White ash, basswood, and black cherry constitute a younger set of trees that spread east and west from the center of the preserve.  The appearance of pole-size trees along the southeast boundary, evidence of logging in the 1930’s, and an old granite quarry along the west edge, are the only reminders of earlier land use and the last signs of disturbance here.  The topography is rolling and Kettle depressions and glacial boulders can be seen throughout the preserve, a reminder of Ozaukee’s glacial past.

The trail at Kurtz Woods is located on Dahlia Lane in the Cedar Sauk Meadows Subdivision just south of Cedar Sauk Road and west of County Highway O.  Follow the link to the map at http://treasuresofoz.org/treasures/preserves/kurtz-woods-natural-area

Not quite so far down on the list of places no one knows, but clearly in the bottom half,  is Bratt Woods Natural Area.  Hundreds of bikers and walkers on the Ozaukee Interurban Trail pass its southern entrances each year, but only a few are aware that the kiosk and trail lead through a 15.5 acre forest on the banks of the Milwaukee River.  The trail meanders through the woods, along the river, and connects the Interurban Trail on the south to Cedar Creek Road on the north.

Bratt Woods is a maple-beech forest and the colors in autumn are spectacular. The blue of the river’s reflection on a sunny day showcases the colors further.  Bratt Woods is one of Ozaukee County’s Birding Hotspots.  In autumn the river is filled with migrating geese and ducks and the trees host a huge variety of little travelers heading south for the winter.

Bratt Woods Natural Area runs along the Milwaukee River in the Town of Grafton, just north of the village.  The Milwaukee River forms its western border for the entire length of the preserve.  It can be entered from the Interurban Trail, just to the east of where the bridge crosses the river  There is parking at the Grafton Aquatic Center.  Visitors can walk across Green Bay Road on the Ozaukee Interurban Trail, just to the north of the parking lot, and follow the trail over the bridge and east to the kiosk and entrance.  Bratt Woods can also be accessed from the cul du sac at the end of Cedar Creek Road on the east side of the river.

Whatever your pleasure, photography, birdwatching, meditation, hiking or strolling, Kurtz Woods and Bratt Woods will capture your imagination and call you back time and time again.  Places less-travelled, they connect to an earlier time in Oz when trees and birds were everywhere.

Both Kurtz Woods and Bratt Woods are Ozaukee Washington Land Trust Preserves.   More information on these places and detailed maps and directions can be found under the Treasures Tab at http://treasuresofoz.org/treasures