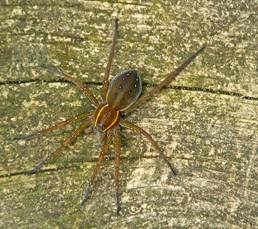 This beautiful six-spotted fishing spider (Dolomedes triton) was photographed at Riveredge Nature Center’s vernal pond. Yes, the BugLady is aware that there are more than six spots visible, but the spot-count refers to spots on the underside of the abdomen.  Fishing Spiders are Nursery web spiders (Family Pisauridae) of which there are about a dozen species north of the Rio Grande.  They are often mistaken for wolf spiders.  Members of the family use web to enclose their egg cases, but not to catch their prey.  The female carries her egg case around and stays with it until the spiderlings have hatched and dispersed.

A spider of ponds and slow-moving streams east of the Great Plains, this gal (Mr. Fishing Spider is considerably smaller and has a slimmer abdomen) stalks around on the duckweed, algae, Riccia (an aquatic liverwort) and even the surface film of the water.  Besides walking, they can run across the water or row across it using several pairs of legs.  Sometimes they glide, pushed by the wind like a sailboat, or jump straight up off its surface to grab prey or to avoid becoming prey.  Fishing spiders also dive and walk on plant stems underwater.

Like all spiders, they are carnivores, eating aquatic insects and, occasionally, tadpoles and tiny fish.  They hunt on the surface film, eating insects that get stuck there and also eating their competition – the water striders.

Fishing spiders wait on shore to

detect the ripples of an insect struggling on the water; then they dart out, grab their prey with clawed front legs, bite it, and inject venom to kill it.  They are, themselves, eaten by fish and frogs.

Fishing spiders have “book lungs,” alternating layers of air pockets and a blood-like substance.  Their body is covered with short, water-repellent hairs that trap an additional layer of air against their body when the spiders submerge.  With this “air tank,” they can stay under for as long as thirty minutes, but all that air may make them so buoyant that they have to grab a plant or rock to keep from floating to the surface.