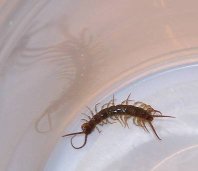 Like insects, they are Invertebrates (as in, “we don’t need no stinkin’ backbone”) but they have a stiff exo-(outer)-skeleton) and are Arthropods (meaning “jointed legs”). They’re in the Class Chilopoda, which has a 380 million year history on this earth. For you newer BugFans, yes, they are not insects. The BugLady uses a very catholic (or first grade) definition/inclusion of bugs – as in – Eeiouw, a BUG!

Centipedes have one leg on each side of each body segment and millipedes, of previous Bug-o-the-Week fame, have two per side per segment. By the New Math, that makes four legs per segment for millipedes and two for centipede. Typical Wisconsin centipedes have about 15 leg-bearing segments (which, alas, by the same “New Math,” leaves us substantially shy of 100 legs) but there are centipedes elsewhere in the world that have as many as 191 segments and so, DO attain hundred-leg status. Their first pair of legs has been adapted with small, lobster-like claws, complete with poison ducts that allow centipedes to grab, subdue, handle, and tear their prey. In Field Guide to Insects of North America, Kaufman refers to the first pair of legs as “fangs.” Centipedes’ legs tend to be longer than millipedes’, and they wriggle when they travel because they move the legs on one side and then on the other.

The stiff exoskeletons that allow millipedes’ to burrow without shredding are insured by their high-calcium diet; the exoskeleton of the ultra-flexible centipede is made of low-calcium chiton.

Centipedes are carnivores that spend the daylight hours in the dark and humid world under leaves, logs and soil; like other inhabitants of the litter, they are flattened, smooth, and not colorful (color is wasted on the eyeless). They emerge at night to hunt for insects and other small invertebrates, and, when no other food is available, they will eat other centipedes. According to the Silversteins, in their wonderful kids’ book Life in a Bucket of Soil, centipedes that have been “blindfolded” (through the application of paint to the multiple eyes located on the sides of their heads) will still strenuously flee the light; they probably have light sensors in their skin. Because their world is dark, they locate their prey through the constant action of their antennae. They stun their prey with venom delivered through their front legs, and they can deliver a painful bite to humans. You can just see the poison “fang” on the centipede in the picture (hint – it’s facing left).

When Mr. Centipede locates the object of his affections (also, blush, by feel) he makes a web across the passageway and places a sperm packet in it. Ms. Centipede retrieves it, stashes it internally in one of those hard-to-reach spots, and starts knitting little booties. The females of many arthropod species walk away from their eggs and may, if they encounter their young, eat them. The females of some centipede species curl around their eggs to hide, protect and groom them – removing mold spores that would kill them.