The day-flying moth, the Virginia Ctenucha Moth (the “C” is silent like the “r” in “fish”), is about 1 ½” long and is fairly common in the northeastern quadrant of the United States. When disturbed it can, like many moths, be mistaken for a butterfly. But, it flies quickly toward vegetation and darts under a leaf to hide, which is generally un-butterfly-like. For a “plain” dark moth, it’s pretty spiffy, with iridescent blue on the thorax and abdomen, an orange head and yellow tarsi (feet). Some species of ctenucha moths mimic wasps and poisonous beetles and so are left alone on flowers. 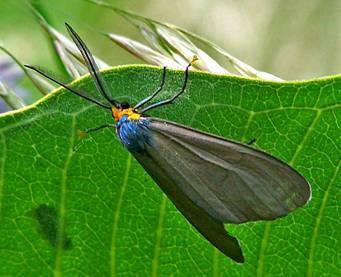 Like the more familiar Wooly Bears, Ctenuchas are in the Tiger moth bunch. They overwinter as caterpillars and pupate in spring in cocoons which they construct using their own hairs. When disturbed, the caterpillars protect themselves by curling up into a ball, which, in the case of the Virginia Ctenucha, reveals its white lateral streak. The caterpillars primarily eat grasses, and both the caterpillars and the adults are found in fields and meadows. The Bug Lady photographed the caterpillar along a damp, gravel road in the early warm days of April, 2008. 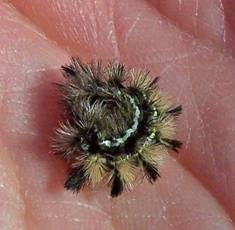 Underwing moths, a huge and confusing group, include more than 100 species in North America, mostly in the East. They have variously striped hind-wings – black with white or with various intensities of pink - that are designed to startle their predators when the moths are in flight. At rest, with the fore wings covering the hind wings, they are admirably well-camouflaged.

This nifty moth is probably the 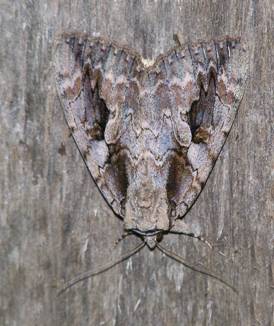 Sweetheart Underwing, Catocala amitrix, which measures three to three-and-a-half inches long and is found over a wide section of the eastern U.S. Catacola caterpillars tend to look like little twigs; many have a fringe on their sides which blurs their outlines and makes them blend onto what they are sitting on. They turn up their noses at older leaves and feed only on new vegetation. Like many caterpillars, they are “food specialists” – the biologist’s way of saying “picky eaters.” The caterpillar of this species feeds on willow and poplar.

The Bug Lady puts oranges out for the birds in summer, and at night she finds a variety of underwings, large and small, feeding on the oranges. BugFans can bait moths by spreading a mixture of fermented fruit, brown sugar and beer on tree trunks. Check the bait nightly for feeding moths and underage drinkers. 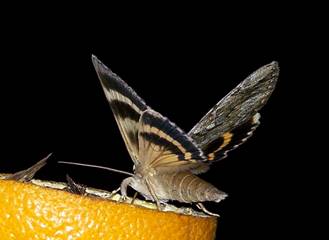 The BugLady highly recommends, if you can find one, The Moth Book an old classic by W.J. Holland (published in 1903 as part of the “My Nature Library,” a series which the Bug Lady devoured as a naiad and which was republished by Dover in 1968). Though some of the classifications/scientific names have has changed, it has plates showing hundreds and hundreds of moths.