The stars of today’s show is the Dance fly, a member of the Order Diptera (“two-wings”). Flies come in an amazing variety of species (some 17,000 different kinds grace North America), and sizes (from barely visible to crane-fly-size), and shapes (long and leggy to short and chunky). Despite all that variety, these carnivores/herbivores/scavengers have been issued only two types of mouthparts - piercing-sucking (think deer fly) or sponging (think horse fly).

Dance flies, in the family Empididae, get their name from the habit of males of some species to gather in large groups and dance up and down in the air in the hopes of attracting females. They can also be found hunting for small insects on and under vegetation in shady areas and on front porches at night (dance flies are very effective mosquito-predators, but both genders may also eat nectar).

The BugLady thinks these may be Long-tailed Dance flies (Rhamphomyia longicauda). The males’ red eyes cover their heads like helmets, and their reproductive organs, located at the tip of their abdomen, are often conspicuous (which sharp-eyed BugFans can just see on the Dance Fly that’s reading the newspaper). The red eyes of the female do not meet in the middle, and she has feathery fringes on her legs. 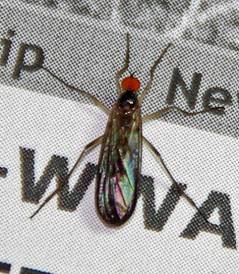 Like the (unrelated) Scorpionflies of previous BOTW fame, male dance flies give their sweeties a nuptial gift to eat while they mate; in fact, females of some species, like the Long-tailed Dance Fly, depend completely on their suitors for food. The gift is thought to enable her to complete the development of her eggs. Males may wrap their gifts in balloons of silk or spit. 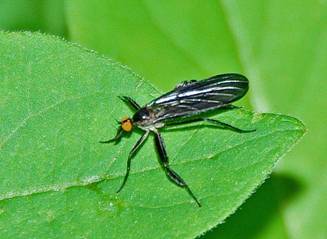 Female Dance flies have feathery legs and their eyes do not meet in the center. 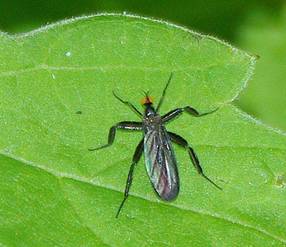 But Dance flies are known for practicing little deceptions on each other. The balloon presented by some kinds of dance flies may be an empty one. Other species traditionally bring inedible plant parts. The fringed legs of the female are thought to make her look like a wide-hipped fertility goddess. Males are more likely to present food to females that look receptive/fertile, and to further enhance their desirability, females may inflate air sacs located along the sides of their abdomen. Scientists believe this makes the female look “egg-laden” to the male, an apparent turn-on. See Eaton and Kaufman’s Field Guide to Insects of North America for a great illustration of an inflated female.

P.S. Several BugFans (you know who you are) have expressed doubt as to whether the BugLady really has milk snakes, house centipedes and false bombardier beetles in her bathtub (not necessarily at the same time); camel crickets in the basement; long-bellied cellar spiders gracing every corner; ladybugs, leaf-footed bugs and box elder bugs freeloading throughout the winter; ants, earwigs and jumping spiders inhabiting the mailbox; and earwigs dropping out of the garage door opener keypad. Is she engaging in a bit of hyperbole in her accounts of her personal experiences with insects? In a word - No. While the BugLady does confess to being Irish and has, in fact, kissed the Blarney Stone, the accounts presented in BOTW are gospel. Thirty-two years ago, when the realtor said “I found the perfect house for you,” he was right.