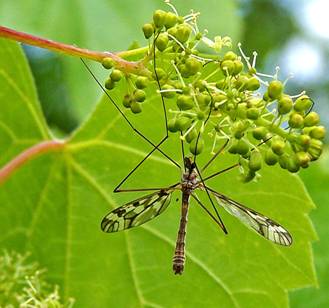 A Crane fly 3” clinging to a wild grape flower.Hey, BugFans,

One of the BugLady's favorite aquatic critters is the larva/maggot (maggot - such a prejudicial term) of the Crane fly. They are gray and plump and pinkie-finger-sized, with bristly ridges ringing some of the segments. According to The Audubon Society Field Guide to North American Insects and Spiders, by Lorus and Marjory Milne, the tough skin of crane fly larvae has earned them the nickname "leatherjackets." Leatherjackets may chow down on the roots of grasses. Aquatic crane fly maggots eat decaying vegetation or small invertebrates and are eaten by fishes. In the Arctic, aquatic larvae are an important food for shorebirds.

Located in the Family Tipulidae, adults look disconcertingly like monster mosquitoes gathered on screens, but they don't sting, and some species do not even eat. Like the other members of the Order Diptera, the Flies, crane flies have two tiny, stemmed knobs called haltare on their thorax (look carefully at the picture); these are a vestigial second pair of wings, and they are used for balance.

There are wingless crane flies that occur on snow in mid-winter and are the largest land invertebrates in the Arctic! The BugLady saw a smaller, winged crane fly on the snow in mid-January of 2008 before the deep cold and deeper snow arrived. 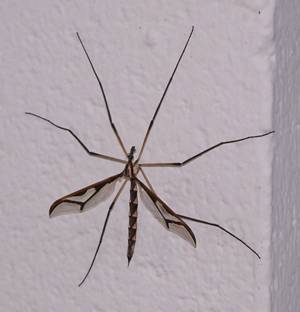 This Crane fly is a huge (leg-spread 3+ inches), fall-flying species.

The Teaching Assistant in her Aquatic Entomology class said that the only insect in the student collections that didn't have to have six legs was the notoriously breakable Crane fly, which may shed legs when stressed and whose legs snap off when one simply looks at them; professionals pin them in the field while they are still soft (although the BugLady does have a vial of "insect glue" for use in reattaching parts to pinned insects. Jack-a-lopes, anyone?).

Their name comes from the adult's long (and therefore "crane-like") legs. Aquatic biologists and fly-tiers have another name for them – fish food.