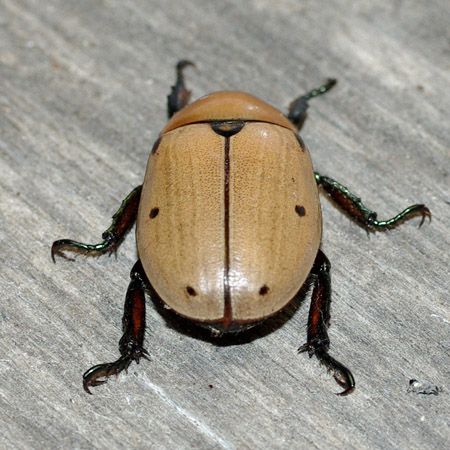 Another porch light bug (not the BugLady's porch, this time - thanks, Deb), this beautiful, plus-sized (inch-or-more) beetle is variously known as the Grapevine beetle (GB), the Spotted June beetle/bug, and the Spotted Pelidnota (Pelidnota punctata). These are NOT giant ladybugs, nor are they related to ladybugs outside of their mutual beetle-hood.

GBs are members of the scarab family Scarabaeidae; fellow scarabs include the Hermit Flower Beetle (of recent BOTW fame), Flower scarabs, June bugs/beetles, dung beetles, rhinoceros beetles, and Japanese beetles. Scarabs are a large family, with more than 30,000 species worldwide and about 1,400 of those species in North America north of the Rio Grande. Six of those are members of the genus Pelidnota. As a group, scarabs are nocturnal, oval, chunky, possessed of sturdy front legs that are widened and toothed for digging, and "plates" at the ends of their antennae (which GBs may hide when they're sitting still and deploy when they're moving around). Really big scarabs in other countries can measure 6 ¼" in length. Adult scarabs are generally vegetarians or scavengers.

The color of GBs varies from pale broom-straw yellow to rich saffron. There's a spot on each side of the thorax, and three on the side of each elytron (wing cover). "Punctata" means "marked with pricks or punctures" and refers to the texture of the elytra. Their undersides may be shiny black or metallic green, and while the legs of southern GBs are light-colored, Yankee GBs have dark legs. A century ago, in response to this variability, taxonomic "splitters" ordained 10 species/subspecies, all of which have since been rolled back into today's GB.

Look for GBs east of the Great Plains, in woodlands, thickets, vineyards and gardens – places where rotting wood/stumps are found near grape vines. Adults eat the leaves of grape (wild and domestic) and Virginia creeper (and there's one account of a GB browsing on spinach in a garden), and the larvae (grubs) feed on rotting wood. Most sources say that the adults do minimal damage in a well-kept vineyard and do not need "controlling."

Ms. GB lays her eggs in stumps and other rotting wood, or on the ground near stumps and rotting wood, apparently favoring dead elm, oak, maple, apple, and hickory. The pale, C-shaped larvae hatch two weeks later, dig/bore in, and feed – and feed, and feed – for the rest of their first year and through their second summer. They eventually reach two inches in length and pupate underground, not surfacing until they emerge as adults the following year. An account published by the Kansas State Agricultural College in 1926 says it all: "In July, 1920, a number of freshly-hatched grubs were placed in a large can containing crushed and rotting fragments of elm wood and left undisturbed in the rearing cave. Upon examination two years later, (July 13, 1922) there were found in the can 12 male and 17 female beetles which had quite recently matured, indicating a two-year period."

A few other tidbits about GBs:

Vanishing Muse: Five years ago, the not-yet-BugLady encountered not-quite-BugFan Patrick and promised to undertake his Insect Education, one bug at a time, and BOTW was born. Initial episodes were short and sarcastic, because BugFan Patrick has a short attention span and because both he and the BugLady might be a tad irreverent. After five years and 244 BOTWs, BugFan Patrick is leaving our midst. We'll miss you, Sonny Boy, "May the wind be always at your back."