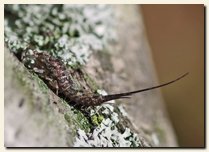 It was found by accident, as many good things are, clinging to one end of a branch that was lifted from the forest floor for a better view of the mushrooms growing on it.

It is one seriously ancient critter. Insects probably got their beginnings 443 to 417 million years ago (mya) during the Silurian Period (for a long time it was believed that insects descended from the millipede/centipede bunch, but evidence now points to origins within the Crustacea). The oldest insect fossil (so far) is a "sort-of-silverfish" that dates back 396 million years to the Devonian Period. There are fossil springtails from that period, too, but springtails not considered insects any more. The Carboniferous Period (354 to 290 mya) was marked by dragonflies with three-foot wingspreads and by an abundance of cockroaches. Tracks of Jumping Bristletails have been found in Permian rock (290 to 248 mya), and the upstart dinosaurs didn't appear until the Triassic Period, some 50 million years later, plus-or-minus.

Jumping bristletails used to be classified with the silverfish (the blameless JB is still lumped with silverfish on some exterminator's websites) but now they're in their own order. In defining an animal scientifically, the groupings move from most general to most specific. Kingdom (Animalia) comes first, the biggest umbrella, then Phylum (Arthropoda), then Class (Insecta), then Order, then Family, Genus, and finally Species.

JBs have two different order names. The newer name is Microcoryphia ("small head"). The older appellation is Order Archaeognatha ("ancient jaw"), which refers to the way the mandible connects to the insect. That 396 million year old silverfish had the new-fangled double-jointed (dicondylic) mandible, but JBs have the original equipment, a single (monocondylic) joint/articulation" that allows its mouthparts to rotate/twist. Ancient insect jaws probably resembled those of JBs, but most insects developed from a side branch that sprouted from the insect family tree early on. Some scientists consider the JB to be the least evolutionarily changed of any living insect - a chip off a very old block. 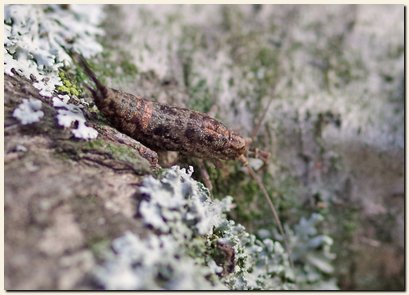 Back in the (Permian) day, there were many wingless insects. Today, most insects have one or two pairs of wings, and most of the species that are wingless derive from ancestors that once had them. Not so the JB and the silverfish, who are primitively/primarily wingless – their ancestors never enjoyed wings.

In the "Is There a Video of That?" category (and there undoubtedly is), consider Stephen P. Yanoviak's research that looked at JBs for clues to the evolution of insect flight. When a JB leaps from tree to tree, gravity is augmented by "steering," using a long filament at the rear of the abdomen ("directed aerial descent") (kind of like a flying squirrel). JBs were dusted with orange fluorescent powder and dropped from branches high in rain forest trees. Results showed that the filament was vital to a successful glide and landing, and Yanoviak suggests that because these wingless, arboreal insects had "flight" under control, winged flight probably originated with terrestrial insects.

There are two JB families worldwide, the largest of which is Machilidae. Both families occur in North America, as do about 20 of the 350 to 450 of the world's JB species.

As a group they are drab (though a close look may reveal a variety of color patterns, and this one is downright iridescent), scale-covered, cylindrical, and generally less than a half-inch long. At one end they have antennae and both simple and compound eyes (with their simple eyes, silverfish are blind to all but light and dark), and at the other, three caudal filaments. They have the requisite six legs, but attached to the underside of some abdominal segments are additional pairs of short, moveable appendages called "styli" (plural of stylus) that serve as sensors of their substrate and that may be left over from their ancestors. JBs dehydrate easily and must absorb water from their environment through tiny, paired sacs that are located on several abdominal segments and that work like pockets turned inside out (OK – "membranous, eversible sac-like vesicles"). 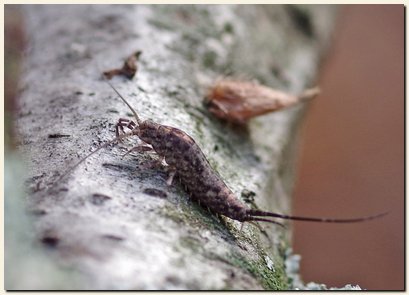 As their name suggests, they jump - six inches and more - which silverfish can't do. This they accomplish by pushing up with their legs while contracting the muscles in their abdomen to arch their body downward. They can run fast, too. Fringes of hairs on the rear filaments explain the "bristletail" part.

JBs live in a wide variety of conditions, from Arctic to desert, and they especially like leaf litter, bark, rock crevices, and rocky seashores. The North Carolina State University Entomology Pages rank JBs as "common in grassy or wooded habitats." They are found in the nooks and crannies of the world, where they shelter during the day and perambulate at night.

Herbivores and decomposers, they use their mouthparts to feed on algae, fungi, lichens, mosses, detritus and decaying organic material, (one source said that they pick at their food rather than chewing it), and they are eaten by spiders. Jumping is their main defense, but like silverfish, a dense covering of scales renders them slippery and helps them escape from the clutches of their predators.

Ancient mouth; ancient winglessness, ancient reproduction, and ancient metamorphosis. Males court, sometimes with elaborate dances, then leave a sperm packet for her to pick up (indirect sperm transfer). She may lay as many as 30 eggs, but to lay more, she must dance again. Young JBs have an ametabolous development; they start as miniatures of adults and simply grow, shedding eight times over the course of about two years before reaching adulthood. Unlike most other insects, they continue to shed as adults and may live for two additional years. Each time they molt, they must first cement themselves to the substrate - a stick, rock, etc. - using fecal material as a glue. Should the glue fail, the insect will not molt, but die.

back to top
Bugs