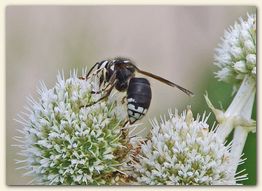 When she was at an Impressionable Age, the BugLady had a teacher who said “Don’t just tell them what it is, tell them ‘What about it’” (because when we know an organism’s name, we don’t know everything about it - knowing the name just allows us to start opening doors).

What is it?  A bug of many names - bald-faced hornet, Dolichovespula maculata, white-faced hornet, white-tailed hornet, blackjacket (a common name that also applies to another wasp) and bull wasp. 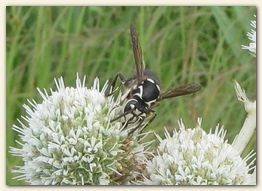 Is it a bee or a wasp or a hornet or a yellowjacket?  That age-old question is muddied by the tendency of many people (but not BugFans) to call all black and yellow flying objects that are pointy at one end either a bee or yellowjacket.  In a nutshell, bees tend to be thick-waisted and hairy (those hairs enable them to collect pollen), and their young eat pollen.  Wasps/hornets are slimmer and less hairy, hold their longitudinally “folded/grooved” wings along their bodies at rest and are “wasp-waisted” (with a thin stalk between the thorax and the first abdominal segment), and their young eat living, dead, and/or pre-chewed “meat,” mainly spiders and other insects.  There are social, semi-social and solitary species of both bees and wasps. 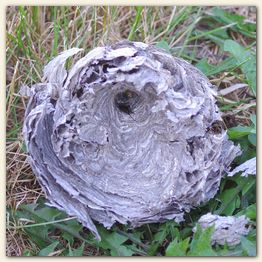 Some anatomical features like the width of the head between the eyes and the shape of the first abdominal segment differentiate wasps from hornets, but again, common usage confuses the matter – we tend to apply the name “hornet” if the paper nest is built above ground and “yellowjacket” if it’s built underground.  And although it’s black and white, the bald-faced hornet is, taxonomically, a yellowjacket.  It’s in the bee/ant/wasp order Hymenoptera and, with the yellowjackets, hornets, paper, potter and mason wasps, in the family Vespidae

The bald-faced hornet is famous for the football-shaped paper nest that it suspends, between two and forty feet off the ground, from a man-made or natural support.  Nests that are built in trees and shrubs often incorporate the plant’s twigs, which makes the nest both stronger and harder to see.  As a DYI project, the nest is a miracle – this small insect chews on wood fibers, mixes them with saliva, and spits out gray paper, fashioning it into layer upon layer of weatherproof material up to two inches thick, 14 inches across, and two feet high, vented at the top for climate control.  The structure is strong enough to support several hundred inhabitants, with three or four tiers of brood cells.  Not all of its inhabitants are wasps, either – inquilines (from the Latin for “lodger” or “tenant”) like some small Ichneumon wasps and, in some parts of its range, cockroaches, may co-habit in the nest. 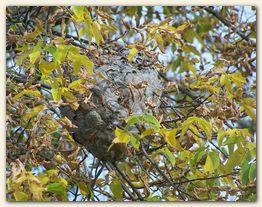 The nest is initiated by the queen, a fertile female that mated last fall and holed up over the winter while the workers, drones, and old queen died.  She starts the new nest in spring by fashioning a spherical structure that’s open at the bottom.  After she raises her first brood, her daughters take over, enlarging and guarding the nest, foraging for food for the larvae and their queen.  They enclose the nest and relocate the entry to a spot that’s low on one side.  Unlike workers of some social insects, the bald-faced hornet workers don’t “specialize” – they may work in the nursery on one day and on nest-building the next, and they can recognize their sisters away from the nest.  For a thorough account of a hornet nest that was built against the glass of a summer cottage in northern Minnesota in the 1950’s, check http://driftlessprairies.org/wp-content/uploads/2014/03/Observations-on-the-Bald-faced-Hornet.pdf 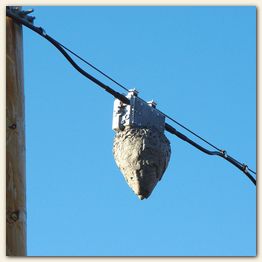 The eggs that will become future queens and drones are laid at the end of summer (she from fertilized eggs, and he, from unfertilized), and the life of the nest deteriorates after the Royals depart.  Nests are not re-used in the northern part of their range and in the far south, nesting may be on-going.

Like other wasps, adult bald-faced hornets dine on nectar, pollen, sap, and other plant juices and on insects and sometimes carrion (somewhere, the BugLady has a picture of a hornet lapping up sugar water at a hummingbird feeder, and they like the grape jelly feeder, too).  They also hunt insects to chew up and feed to their developing larvae.  They eat a lot of caterpillars, flies and smaller species of yellowjackets, and for this they are considered beneficial insects to have around.  As the nest winds down in early fall, adults eat less meat and more carbs.

Do these pointy-ended critters have any enemies?  A variety of other insects dine on them, as do frogs, spiders and birds.  Nests are raided by foxes, raccoons, and skunks, though the BugLady wouldn’t consider hornets to be an “easy protein.”  Birds peck apart old nests in winter, looking for frozen workers and leftover larvae and pupae, and for the spiders and other invertebrates that may shelter there.  These beautiful nests are commonly displayed in nature centers and private homes, but the fact that birds routinely find a winter meal in them should provide a cautionary note.  Some people recommend enclosing the nest in a heavy plastic bag for a few months to contain any newly-thawed workers. 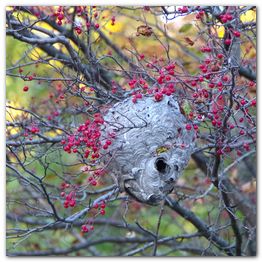 Berndt Heinrich, biologist extraordinaire, once demonstrated experimentally that these hornets are very efficient at regulating the temperature in their thorax, a talent that allows them to produce heat by muscle contraction and warm up their flying apparatus. They can and function at cooler temperatures than their competition, and they can fly with agility at temperatures when their prey is still sluggish.

Good news, bad news – the bald-faced hornet may be a valuable control on other insects, but close encounters with a bald-faced hornet nest can be memorable, especially if it’s a low nest that is well-hidden.  Hornets/yellowjackets, like many social insects defend hearth and home vigorously, and unlike the barbed, single-use stinger of the honeybee, their stinger is smooth and designed for multiple use.  Because they use their stingers to capture small invertebrates, injecting a toxic, chemical cocktail when they sting, their sting may provoke an allergic reaction in some people (and pain).  Fortunately for us, many hornet nests are high off the ground, so human-hornet interactions are minimized.

Bald-faced hornets are widely distributed over North America, but absent from areas that are especially dry.  They have adapted well to encroaching civilization and can be found in urban and suburban areas.

Go outside.  Look at bugs.

back to top
Bugs