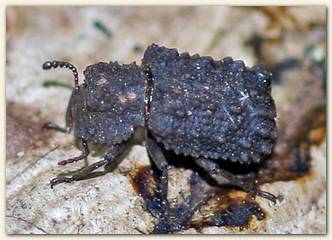 Every once in a while, life hands you a special treat. Late one recent afternoon, the BugLady was walking through the beech woods, moving far too slowly, considering the size of her mosquito escort, scanning a fallen log that was adorned with a few deteriorating shelf fungi (can you spell "bug-nerd?"). Suddenly, part of a fungus twitched.

If you're singing along, we're on page 192 of your Kaufman Field Guide to Insects of North America or page 583 of the Audubon Society Field Guide to North American Insects and Spiders – the forked/horned fungus beetle (Bolitotherus cornutus) ("crowned"). The FFB is in the Darkling beetle family Tenebrionidae and is the only species in its genus. It's found east of the Mississippi, at night, in the woods, in the company of woody, polypore shelf fungi.

Males look like half-inch long "triceratops." Their horns can vary in size quite a bit, and most males have a small, forked, rhino-like horn at the end of their snout that the BugLady does not see in her photographs (hers is a bi-ceratops). Females don't have horns, but the lower edges of their heads are widened, and they wear an extra bit of armor plate on their opposite ends (more about that later). They are drab, knobbed, pitted, exceedingly "thick-skinned," and primordial. Oh, but then there's that beautiful gold fringe on the underside of the male's horns – The Beetle with the Fringe on Top. It has been suggested that the hairs serve some general sensory function, but the BugLady couldn't find any corroboration of that, and considering the FFB's lifestyle, the hairs must take quite a beating. 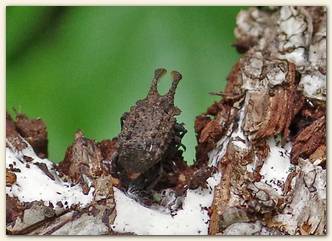 About the natural history of the FFB we know plenty, thanks to research done in the 1950's by M. Pferrer Liles and in the '60's by Ann Pace (http://www.americaninsects.net/b/forked-fungus-beetles.html). All stages of the beetle live and overwinter and reproduce and feed in/on woody shelf fungi (here in God's Country they like the "artist's fungus," Ganoderma applanatum). Once they find a good fungus, a small population of beetles may occupy it for as long as nine years, moving on when the fungus is no longer usable. Larvae turn the fungus into a honeycomb of tunnels. Though there may be several larvae in a tunnel, they stay out of each other's way; but if, in its travels, a larva stumbles across a FFB pupa, it might cannibalize the pupa. M. Pferrer Liles noted that larval tunnels often contained masses of white mycelium (fungal strands) that had grown around and permeated the body cavity of a dead FFB larva. Fungus mummifies larva – sounds like something the BugLady saw on "The X-Files."

They have few predators. A braconid wasp parasitizes the larvae, and a few nocturnal mammals try to eat them (more about that later, too).

So, what was the twitching all about? The male initiates courtship by climbing onto the female, facing the opposite direction and griping her elytra (hard wing covers). Scientists have actually measured an FFB's grip strength, because having won Fair Maid, he may be dislodged by the horns of her other ardent suitors. Males use the horns in pushing contests, and the guy with the biggest horns usually wins; likewise, bigger beetles have longer legs and a stronger grip. Anyhow, there he sits, rubbing her head with his feet and, yes, twitching. In this position, the underneath of his abdomen rubs against two "tubercles" on the top of her thorax. The friction may produce a rasping sound that can be heard six or more feet away (the BugLady didn't hear it, but the sound is typically made at night, and the movements can be made without producing the sound). Courtship may last several hours.

When copulation is imminent, he turns around so they are facing the same direction. According to one source, females do not pick their suitors, but they can decide which male shares his bodily fluids with her. If she is not receptive to the male, she can block the transfer of his spermatophore by not opening the heavy plates at her rear. After mating, the male stays in place for a long time, guarding his investment from other males.

A female lays very few eggs a year (a dozen at most), and before each egg, she must court. Eggs are laid singly, in the early evening, in cracks on the tops and sides of the fungus. She picks her nursery carefully – studies have shown that larvae that develop in larger fungi not only have a better survival rate, but the male larvae will have larger horns when they mature (and they'll get all the girls). Once laid, each egg is plastered over with what was tactfully described as "a dark, excrement-like material" that is smoothed down by hairs on the female's abdomen.

FFBs lead unhurried lives. The larvae stay in their eggs for several days after hatching, eating the capsule itself before burrowing into the spore-bearing tissues of the fungus, and the new adults stay in their pupal cases for a few days after emerging, until their color darkens (here's a newly emerged male http://bugguide.net/node/view/97192/bgimage). An adult may live for four or five years, never venturing far from its natal fungus. In fact, until 1999 scientists were unsure about whether FFBs could fly (they can), and assumed that FFBs hoofed it across the forest floor to new sites. There are two generations per year; larvae overwinter within their fungi; adults stay in fungi, decaying stumps, and under tree bark. 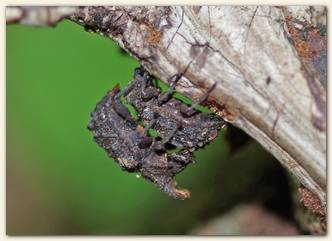 It's hard to imagine that a beetle that looks like it heaved itself up out of the very wood itself would need a sophisticated defense system, but the FFB has a dandy one. Oh, sure, a startled adult FFB, like many other kinds of beetles including Tenebrionids, plays dead (death feigning). It tucks its legs into dedicated grooves on the underside of its body, and blends in with its surroundings. But, it's got a chemical trick up its sleeve, too.

In Secret Weapons, Eisner says that "An unusual feature of B. cornutus is that it may extrude its glands preemptively, in response to the mere anticipation of an attack. All you need do to cause the beetle to evert its glands is to breathe on it. This readiness to deploy its chemical weapons may serve the beetle well, especially in defense against predators such as mice, which could afflict a fatal injury with their very first bite." Eisner goes on to say that the FFB defines a "breath" as a warm, moist, pulsing puff of carbon dioxide. Producing a chemical defense is costly, energy-wise, and the FFB is unusual in using it before its predator actually makes contact. The unfortunate herbivore that mouths the inhabited fungus may suffer the same fate. FFBs do not use a cannon to kill a gnat – when nibbled by an ant, they depend on the toughness of their exoskeleton. For many close-up pictures, including some of a beetle spraying, see http://www.performance-vision.com/FungusBeetle/.

Last but not least – yes – phoresy! Those legged, pink dots on the female FFB's head are mites! A number of different species of mites have been documented on FFBs. In one study, researchers checked FFBs in a museum collection for phoretic (hitchhiking) mites and found them on about one-third of the beetles. The mites are species that live in fungi - some eat spores – and they take advantage of the FFB's longer legs to get around.

Those horns remind the BugLady of one of her favorite cartoon characters, The Tick. And as the Tick once said, "Mysteries abound."

June 16 to 23 is National Pollinator Week. Finally, a holiday for BugFans (there will be postal service)!

back to top
Bugs, Citizen Science