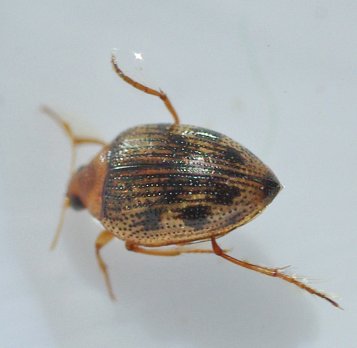 The BugLady heard an interesting interview on the radio a while back in which the guest said that non-scientists are intimidated by the feeling that they must know the exact names of the plants and animals on their landscapes in order to discuss them; the belief that those names belong only to scientists causes people to become estranged from the natural world.  And while it is true that each organism has one scientific name that is universally recognized, the amazing world of common names is up for grabs.  The more abundant or beloved - or notorious - an organism is, the more common names it’s likely to have collected.

So – what to name a small, yellowish, spotted, aquatic beetle that scrambles through the water, head down, in perpetual motion?  Rather than “rowing” its legs in synchrony like a water boatman, this beetle “dog-paddles,” moving its legs alternately.  It appears to crawl through the water, so Crawling Water Beetle it is.

There are almost 70 species of Crawling Water Beetles (family Haliplidae) in North America, divided up among four genera (this beetle belongs to the most common genus, Haliplus) (Haliplus, because the other common genus, Peltodytes, has two spots on the thorax, just north of the wing covers or elytra).  Identification to species can be tricky and gets very personal.  Haliplids favor still, shallow water and the pool areas of streams and rivers everywhere (except Antarctica), and the BugLady read about an endangered Irish species that lives in tidal salt marshes.  Three species of Wisconsin CWBs are listed as rare.

CWBs that live in ponds and lake edges can be found scrambling through the water column or feeding in mats of aquatic plants, especially algae.  Where there is a current, look for them in crevices between rocks.  Unlike many of their aquatic brethren, CWBs are bulky, mediocre swimmers that are not streamlined, and other than some long hairs on their back four feet, their legs are not adapted for swimming (they are weak fliers, too, on wings that are rolled – not folded – under the elytra when not in use).

Their two hind legs are modified – but they’re modified for breathing.  The sections at the base of each hind leg (closest to the body) are greatly flattened to form “coxal plates” that meet under the beetle.  Together, the coxal plates cover part of the thorax and abdomen and create a second space to carry oxygen.  When it needs oxygen, a CWB backs up to the surface film, takes in air, and stores it in an area on its back, above its abdomen and beneath its elytra.  A reserve supply is cached between the coxal plates and the lower surface of the abdomen.  Insects take in air through pores called spiracles, and there are spiracles located under the coxal plates.

A bubble of air peeking out from under the elytra helps CWBs float to the water’s surface (a CWB that’s low on air must clamber up the vegetation).  The long, skinny CWB larvae simply breathe through their skin and don’t develop spiracles until they are almost ready to pupate.

CWBs lay their eggs on submerged aquatic plants, especially filamentous algae (who can forget Spirogyra??).  Some excavate small holes in the plant tissue and lay their eggs inside.  The short-legged, hook-footed larvae creep about on algae mats, playing dead when alarmed, feeding on their algal substrate with mouthparts that are adapted for grabbing algae, piercing its walls, and sucking out its juices.  Larvae that are too tiny to puncture the tough cell walls feed on the fungi and bacteria on the algae’s exterior: http://bugguide.net/node/view/327585.

CWB larvae pupate on the shore, in a cell they prepare under a rock or log near the water’s edge.  Their new-found spiracles allow them to breathe out of water.  Some species spend the winter as pupae; others emerge to spend the winter in the water as adults.  Adults continue to feed on algae, but they add protein to their diet in the form of tiny invertebrates like worms, daphnia, and midge eggs.

Last week’s BOTW Bug Mysteries “Crowd Sourcing” invitation brought a response from BugFan Mike, who suggests that the spider that the BugLady thought was a Bolas spider is actually a dead Star-bellied orbweaver (Acanthepeira stellata) that may be covered by a layer of white fungus.  Next time, the BugLady will prod her subject a bit.  Bolas spiders are nocturnal, secretive and very (very) uncommon in Wisconsin.

He also thinks that the soldier beetle is the victim of some kind of entomopathogenic fungus that creates Zombie insects (don’t panic – just slow down and “unpack” that word.  “entomo” = pertaining to insects and “pathogenic” = disease-producing).  Scientists are learning more these days about pathogens that “take over” some brain functions and cause infected organisms to behave “recklessly” (like the infected land snails, of recent BOTW fame, or the horsehair worm from three years ago).  In the case of the soldier beetle, it is thought that the pathogen’s “instructions” to the dying insect include attaching to vegetation up off the ground in order to allow the fungal spores to disburse more efficiently.  The BugLady suggests that BugFans who are feeling smug about dodging the Zombie bullet should read the sections on “Possible Links to Psychiatric Disorders” and “Behavioral Changes” in the Wikipedia article on Toxoplasmosis.