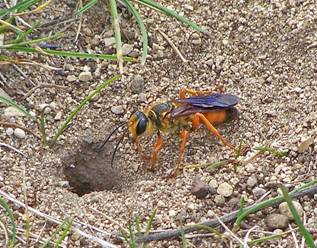 Our second BonusBug of the year is (probably) the Great Golden Digger Wasp.  Her scientific name is (probably) Sphex ichneumoneus (the “probablies” are a nod to the fact that “picture-keying” – matching the bug to the picture in the Field Guide – is a chancy sport).  She is in the Family Sphecidae, and her relatives include a bunch of solitary wasps like Mud Daubers, Sand Wasps, Cicada Killers, Cricket Hunters and Hunting Wasps (most bees and wasps are solitary; the communal paper wasps and honeybees just get all the press).  Although they are solitary, they tolerate the activity of other diggers in the neighborhood, so you may find other tunnels nearby, and there are records of “colonies” nesting in favorable soil year after year.

Great Golden Diggers make vertical tunnels, constructing several cells at the end of each tunnel.  Then they go hunting – katydids and crickets are favorite prey; a wasp that is big enough to hunt, sting and paralyze, and fly off with a katydid is a sizeable wasp (she was more than an inch long).  The adults drink nectar (and possibly some bodily fluids from their “catch”); the insects they anesth 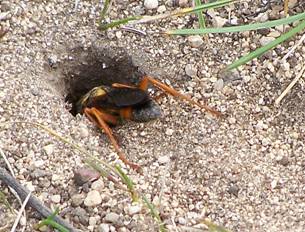 etize are stashed in the tunnel’s chambers, each one with a wasp egg placed on it.  When an egg hatches, dinner is served.

The BugLady watched as this wasp excavated; she had already brought up a noticeable mound of sand.  She crawled into the tunnel head first and backed out again, kicking some sand out in back of her when she exited.  There was a large ant hill nearby, and ants were common on the trail where she was digging.  There were several wasp-ant interactions when ants investigated the hole or the wasp.