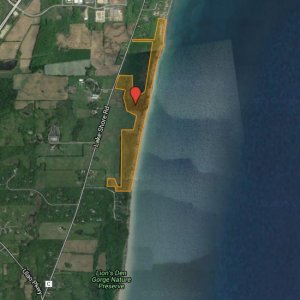 Not open to the public yet

CedarGorge/Clay Bluffs Nature Preserve is the newest addition to the many treasures of Oz. The Ozaukee Washington Land Trust acquired it on August 25th after more than ten years of community-supported effort. OWLT immediately placed a conservation easement on the 100 +acre preserve and turned it over to Ozaukee County Planning and Parks for use as a county park, much as was done in creating Lion’s Den Gorge Nature Preserve, which lies just to the south.

Ozaukee County Planning and Parks describe the property as such:

The property includes a primary environmental corridor ( a critical species habitat site and a natural area.) It had been identified for protection by Ozaukee County in the adopted and certified Park and Open Space Plan for Ozaukee County: 2035 as part of a priority project area known as the Lion’s Den Gorge Project Area. In addition, it has been identified for protection as part of the Multi‐jurisdictional Comprehensive Plan for Ozaukee County: 2035.

It is a significant property on the International Lake Michigan Migratory Bird Flyway and part of two Important Bird Areas identified by the State. The property provides a unique recreational opportunity to provide a site on the Federal/State designated Lake Michigan Water Trail and a direct connection to the Ozaukee Interurban Trail via an off‐road trail. It borders and enhances the recently designated NOAA Wisconsin Shipwreck Coast National Marine Sanctuary.

Finally, it complements the existing Lion’s Den Gorge Nature Preserve County Park, which continues to be one of the most popular County Parks and has received many accolades for its passive use recreational development.

Show in Google Maps
« previous next »